Flooding of the Tiber

After so much rain, the river Tiber is rising fast…but is still away from the high levels reached two years ago. 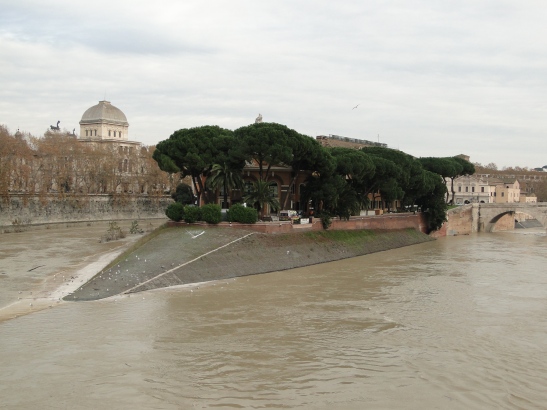 It was only over a century ago that the river banks were built to protect the city from recurrent floods. Towards the end of the 19th century, Rome, which had recently become the capital of the new kingdom of Italy (in 1870), underwent an urban transformation. Brand new neighbourhoods, such as Prati near the Vatican, were built to accomodate the growing number of civil servants settling in the city. Whole areas were demolished or transformed to rebuild the city, making way for property speculation as well. The works to contain the river Tiber date from these times, and started following an initiative from Garibaldi when he moved to Rome. Ironically, when his victorious troops entered the city in December 1870, they found the city completely flooded.

As part of the works, everything along the river banks was destroyed, including the characteristic water mills. Even the port of Ripetta, the major river port of Rome mentioned in many 19th century travel accounts, was demolished to build the Ponte Cavour, the main bridge linking the historic centre to the new district of Prati.