Escaping to the Abruzzi mountains

One of the joys of living in Rome is to be able to get out of the city easily, and be within reach of a great number of amazing places. One of them I recently visited is Santo Stefano di Sessanio in the Abruzzi mountains (2 hours away), a typical medieval village perched on top of a hill, which was practically abandoned not so long ago.  It took the dream vision and relentless energy of one man to transform that neglected village into an unforgettable retreat, turning each house into a unique hotel room to create a new concept of a hotel with rooms scattered through the old town (albergo diffuso as it’s called in Italian). 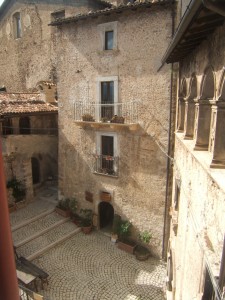 town centre with part of the Medici palace on the right

Like many small towns in central Italy, Santo Stefano di Sessanio has a strong past, having been for centuries a stronghold of the Medici family. Because of its location on the border between the Papal States and the kingdom of Naples and its dynamic wool industry,  the town had a strategic and commercial importance during the Renaissance which the cunny Medici family didn’t ignore. 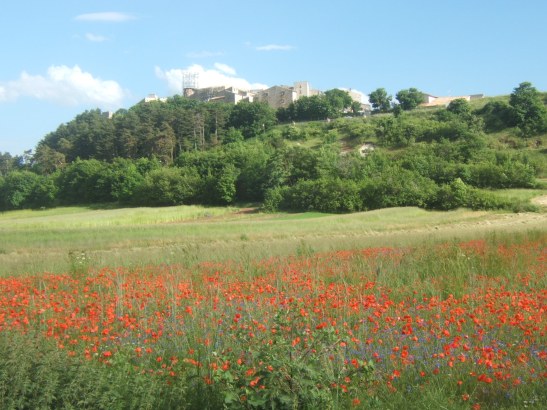 Although the region was extremely poor in terms of agriculture, it produced a high quality wool which was very much in demand in commercial and cultural centres such as Florence. Trade flourished and for a few hundred years, Santo Stefano became a wealthy town with palaces and master houses being built by prestigious families.  Its fate turned again following the upheaval of the French revolution, when the political map of Europe changed irreversibly and it became once again a poor mountain village, isolated from the main commercial centres of the new Italy. Its inhabitants left the region to emigrate to better lands and easier lives.

The restauration project, which started in the mid-1990s, aims at reviving the town’s traditions as they once were. That includes producing and cooking food from the region only, making linen and textile from local plants and re-establishing local crafts. The idea being that the hotel and restaurant are there to provide guests with a whole cultural experience. The latest technology such as wi-fi is available in the rooms,  but all the food served is home-made in a traditional way.

Santo Stefano was damaged during the earthquake that hit l’Aquila in early 2009; its landmark tower collapsed, and a number of houses now need supporting scaffolding to keep standing. The project suffered too but it is still alive and more determined than ever to make the whole region flourish once again. For more information: