I finally made it to St Ivo alla Sapienza ……This famous church, considered to be Borromini’s masterpiece is only open from 10am to 12pm on Sundays, the rest of the time, we can only admire the facade.

The church was commissioned to Borromini in 1642, a few years after he stunned Rome with his creative talent at San Carlino (see previous post).  St Ivo was initially more difficult as a project because Borromini was confined to an existing space, that of the church of the university palace of La Sapienza (meaning knowledge or wisdom) which was restricted by the courtyard built previously by 16th century architect Giacomo della Porta. Instead of limiting Borromini, it unleashed his creative genius. In the small rectangular space he was given, he created a plan based on two super-imposed triangles, the triangle being the symbol of the Trinity, which he smoothened with concave and convex edges. At the same time, the three round edges are reminiscent of the Barberini coat of arms, which is represented by three bees to recall that it was Pope Urban VIII from the Barberini family who commissioned the church.

For the inside decoration, he used Baroque symbols such as stars, angels and flowers arranged according to geometrical patterns, including at the same time classical elements such as Corinthian columns.Like in San Carlino, he created a vertical effect, whereby the eyes are instinctively looking up towards the light, as if there were a kind of upward pull. 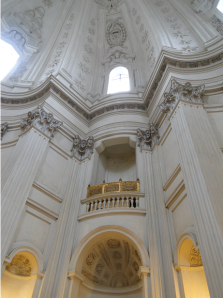 the inside lines at St Ivo's

Borromini was in a way a “minimalist” architect for the Baroque era. His work is all about light and purity of lines. Nothing is ever too much with him….he manages to take you in slowly, gradually but irreversibly.It took him nearly 18 years to complete as the church was consecrated in 1660.

Outside, the tower is just a striking with its helicoidal shape, just like his famous staircase in Palazzo barberini (see previous post). 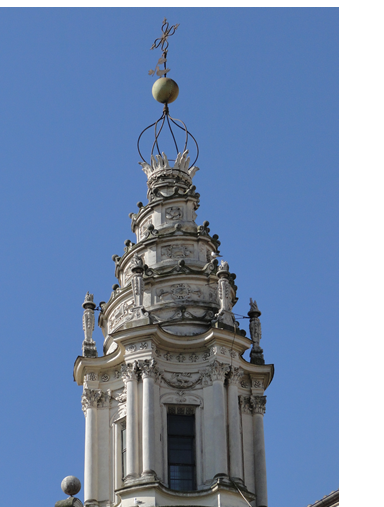 Just as importantly, St Ivo’s is around the corner from Café Eustachio, one of the best in Rome. The dilemma is whether to have a coffee before or after visiting the church, or both!